When it comes to video, you’ve likely thought about (or at least come across) the topic of adding closed captioning or subtitles. And many people ask, what’s the difference? Is there a difference? Is one better than the other?

This article will dive into the difference between the two (yes, there is a difference), how they’re used in the video world today, and why they’re important to include.

What Are Closed Captions?

Have you ever watched a movie where the dialogue was almost impossible to hear? Or maybe the characters had a strong accent making them difficult to understand? Well, this may be a time where you’d consider turning on closed captioning. When doing so, you’ll likely be selecting the option that reads English [CC].

The bonus of closed captioning is it not only shows you what’s being said, but it also describes other sounds and context clues that help a viewer follow the scene. For example, if a phone is ringing in the background, closed captioning would include this text on the screen (Phone rings). If someone is screaming, the text would say (Screaming). It even gives cues for silence (Silence).

Closed captioning fills in much-needed details of a video. The goal is that someone could watch a video without any sound, use closed captioning, and still understand the storyline. These on-screen cues and details are especially important for people who are deaf or hard of hearing.

In case you’re wondering for post-production purposes, closed captions are delivered as a sidecar file along with the video file so a user can turn them on or off.

Subtitles are mostly used as a translation for viewers who may not speak the language. The text is usually burned into the video so you, the viewer, don’t have to do anything on your end to understand the dialogue. An example of this is when Daenerys Targaryen is speaking Dothraki (yes, I know it’s a made-up language) on Game of Thrones and subtitles pop up in English. 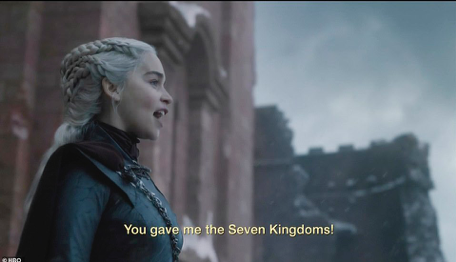 Subtitles allow some creativity as far as font, color, and size. It does take a little extra time and costs a bit more but can be important in telling your story.

Why to Include Closed Captions or Subtitles in Your Video

First, your consumer could be deaf or hard of hearing. Adding closed captioning or subtitles instantly makes your video more accessible to everyone. In this day and age of media consumption, accessibility is a must.

Besides that, people generally don’t watch video the same way they used to. In fact, many people prefer to watch video without sound—like on a bus full of people when the consumer doesn’t have headphones to listen privately. Some people like to use closed captioning while watching their favorite TV show so that they don’t miss any important dialogue.

Are you still trying to decide if it’s worth adding closed captioning or subtitles to your video? Take a look at some of these statistics about your potential consumers:

From a 2019 survey of U.S. consumers from Verizon Media and Publicis Media. From the World Health Organization:

SEO Impact of Closed Captions and Subtitles in Videos

Want your video to be seen? Google and YouTube factor closed captions into their ranking algorithms. That means your video will rank higher in search engine results if you include closed captions. The higher the rank, the more likely people will find and watch your video.

When you’re looking to produce video, be sure to keep accessibility in mind from the start. Adding closed captions or subtitles gives more people the opportunity to not only watch your video but understand its content.

And yes, there is a difference between the two. As a reminder, closed captioning describes the dialogue and other sounds, such as a phone ringing, in a scene. Subtitles are used to translate a different language for the viewer.

And if you’re still wondering if it’s worth the extra time or cost to add in captions, just remember that research shows many people are watching video without sound. The math is simple: no closed captioning? Fewer viewers.