When you’re taking a picture of something or someone and posting it to social media, you’ll need to decide if it’ll be a landscape or portrait orientation.

Are you rocking a great outfit and want the world to know? Take a vertical photo and show off those shoes. Are you watching the sunset over the Grand Canyon? Turn that camera sideways to capture as much beauty in a single frame as possible.

While deciding how best to take a picture has been a long-time practice, doing the same for video hasn’t. This is largely, in part, because we had limited resources to capturing video.

Now, with the power of the smartphone, we’ve all become cinematographers with the simple touch of a button. But because our phones are shaped a certain way, (*cough*vertical*cough*) it’s ignited a debate over whether you should record your content vertically or horizontally.

This article will dive into the rise of the vertical video including best practices on how to film your content based on its final viewing platform such as YouTube, Instagram, or broadcast.

You can think of horizontal video as “old school” – how we’ve historically been watching our favorite TV shows and movies. Heck, it’s how our TVs are now shaped. Because of this, horizontal video isn’t going anywhere.

When I worked in local TV news, we would sigh, moan, and scream when viewers sent in vertical video. This meme is exactly how I felt (at the time).

While this meme still makes sense for TV viewing, more people are watching video on their phones (mobile video consumption rises by 100% every year), so it’s a bit of a double-edged sword.

It’s simply important to think about where you’re posting your video content when you’re filming your visual assets. And, keep in mind, despite being considered a social media/mobile platform, YouTube still adheres to the 16:9 ratio (we’ll dive into aspect ratios later in this article).

One study found that more than 75% of video viewing is mobile, so the rise of vertical video isn’t necessarily a surprising one. Not only that, but smartphone users hold their phones vertically about 94% of the time.

Social media has played a big role in the way to record and view video. As mentioned, YouTube is an exception to this rule, even on mobile. A survey found 7 in 10 YouTube users default to horizontal viewing when watching videos on their smartphone.

However, when you add Snapchat, Instagram, and Facebook (especially when it comes to stories) to the equation, you’ll see an uptick in vertical video. More than 7 billion videos are viewed on Snapchat daily, with the majority being filmed vertically.

The rise of vertical video can partially be traced back to the 2011 launch of Snapchat. It allows users to take pictures and videos on their phones, share it with friends, which then immediately disappear. The platform really exploded in 2013 with the implementation of their “stories” function, which allowed users to string together longer content that would stay on their page for 24 hours before disappearing.

How Selfies Play a Role in Vertical Video

So, why did vertical video take over these platforms? The rise of the “selfie.”

Back in 2013, BBC News wrote an article about the rise of a selfie – AKA taking a picture of yourself – and found that more than 23 million photos were uploaded with the hashtag #selfie.

When you think about taking a selfie (which I’m sure we’ve all done at least once), it’s most natural to do so while holding your phone vertically. I know I struggle to take a horizontal selfie when I’m trying to cram other people into the picture. The same logic can be applied to recording yourself on video.

Try recording yourself on your phone but turn it horizontally. It’s a little awkward, right?

“Selfie” has become such a cultural, worldwide phenomenon, it has even been added to Merriam-Webster’s dictionary, Oxford Dictionaries, and Dictionary.com.

Now, you may be wondering, “What does all of this knowledge about vertical vs. horizontal video mean?” Well, as earlier mentioned, it’s about considering where you’ll be posting your content before you hit record, especially if you’re filming on your smartphone.

Depending on where you’re posting your content, you’ll find different aspect ratios for the platform. An aspect ratio refers to the proportional width and height of your video. So, a 16:9 ratio will be rectangular and horizontal, while a 1:1 ratio will be a perfect square.

Here’s a quick guide to aspect ratios and what they look like.

If you have a video you’d like to post on multiple platforms, go for it! You’ll just need to keep the different aspect ratios in mind while filming to make sure you can crop your visual assets appropriately (and without cutting things out of the frame) in post-production.

In the side-by-side example below from Queen Bee Mixology, you can see how the YouTube version (left) has plenty of space to the left and right of the cocktail so that the drink itself wasn’t altered when pairing down the aspect ratio for Instagram (right).

How to Shoot Your Next Social Media Video

Video dominates the majority of online content, meaning it’s an effective way to share your message professionally and personally.

When you’re deciding how to film your video, it’s important to consider your target audience and where they’ll be watching. 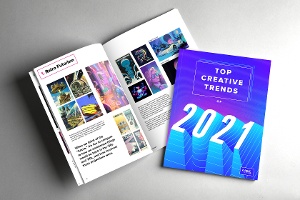