In Studio vs. On-Location: Pros and Cons for Marketing & Corporate Videos 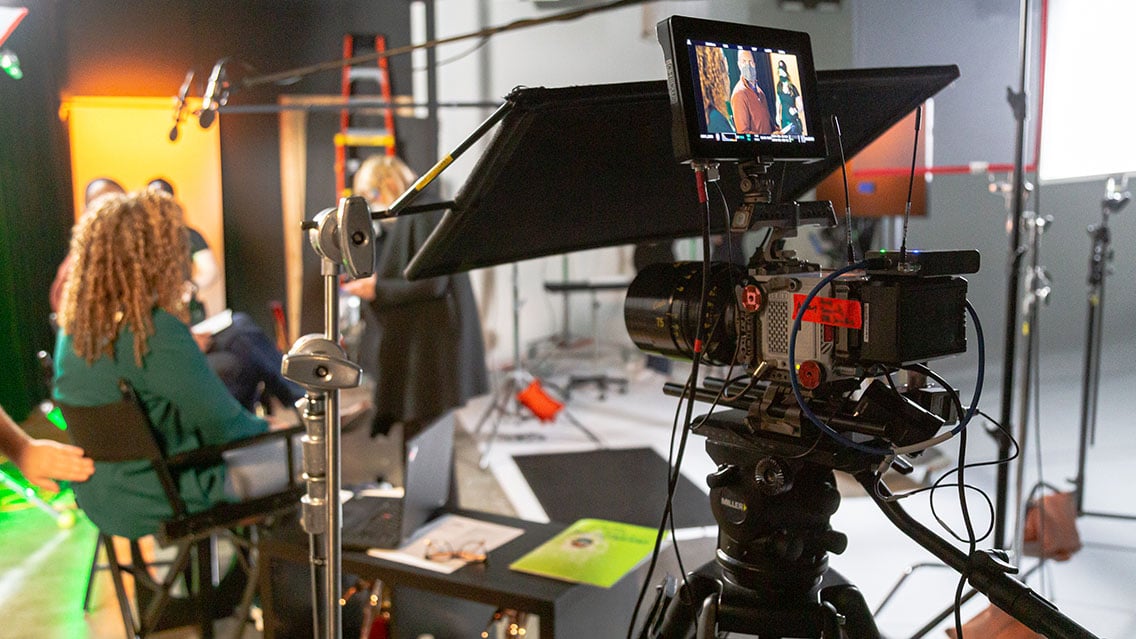 You’ve been tasked with getting a video produced for your company. You want to impress your boss, so you reach out to a quality vendor, like VMG Studios (good choice!). During the early discussions, the question of whether the video should be animated or live-action is brought up.

“We can do both!” says VMG. “We’re a hybrid creative marketing agency and video production studio.”

After further conversation, it’s decided that live-action is the best option for your project. An important follow-up question is where to shoot the video. The choices are on-location or in studio. You ask, “What are the pros and cons of both?” VMG Studios says, “Funny you should ask. We wrote an article about that.”

People sometimes think “on-location” automatically means shooting outdoors, but that’s not the case. It just means it’s somewhere other than a production studio. For clarity, an in-studio shoot will always be indoors, while on-location shooting can take place inside or outside.

This article will outline 5 considerations that will come into play when deciding where to shoot your video, including the advantages and/or disadvantages of both options that can affect your budget and stress levels.

Production studios, by and large, have one purpose—for shooting photos and video. You contact a studio manager, set the shooting dates, and book it.

Shooting on-location poses more logistical problems. First, there’s location scouting. You go to multiple sites to see which one best fits your needs, and that takes time and personnel. Then, you check availability.

Let’s say it’s in an office building. The space is only available at the owner’s convenience and has to be scheduled around others working on the same floor or nearby offices. If it’s in a public location, like a park, then you have to get permits, which can take between days and weeks for approval.

An additional pro is finding a production company that has its own studio space, like VMG Studios.

When renting an external studio space, you’re at their discretion in terms of scheduling. You might need to wait longer for the studio space, ultimately pushing back your initial deadline, or you might feel rushed into a timeslot and not properly prepare all the pre-production assets. We own the scheduling in terms of our studio, meaning we can find time to fit in our client’s project within their expected timeline.

READ: Benefits of Having a Studio Space

With a studio, you’re likely paying a fixed day rate or half-day rate, which is what we offer for our studio.

Some on-location rentals also charge by the day, but frequently charge hourly. Peerspace is an excellent source for finding unique shooting locations.

If you are shooting a project for a client that already has locations at your disposal, then that can be a big cost saver. We frequently shoot videos for our enterprise customers who have numerous office buildings that we can leverage at little or no cost, which is a money saver for them.

Where costs can climb when shooting in a studio is when there’s substantial set design or production (which we’ll talk about shortly).

When shooting on-location, here are a few questions that will need to be addressed:

When shooting in a professional production studio, all of those things are taken care of.

One major convenience for shooting on-location is that your set is (generally) already built. You might need to add a few touches, but for the most part, all the heavy lifting of creating your shooting environment is already done.

Another plus to shooting on-location concerns your on-camera talent. If you’re hiring actors, it’s not a factor. They show up wherever they’re told. They’re paid to be there. However, there are many times where those on-camera are not professional actors and have to come in to be recorded on their own time.

This is quite common for corporate marketing videos.

For non-actors, a studio shoot can be a little intimidating, and then there’s the time spent having to drive to and from the studio.

If you can shoot at the company’s location, the first advantage is that the employee only has to walk down the hall. We’re bringing the crew and equipment to them instead of them coming to us. Secondly, it’s a more comfortable surrounding for them. They’re on their home turf, which can lessen their anxiety a little. There’s something to be said for that.

In a studio, you’re confined to the four walls of your space. You can only back the camera up so far. However, shooting in a studio also gives you the option of changing your space to meet your needs. It’s a blank canvas. You can build a set from scratch and design it as you see fit. You can create it modularly, to swap out pieces as the situation demands. You are the Great and Powerful Oz! The studio is your oyster (as long as you have the budget). That said, set design and build can be quite expensive. 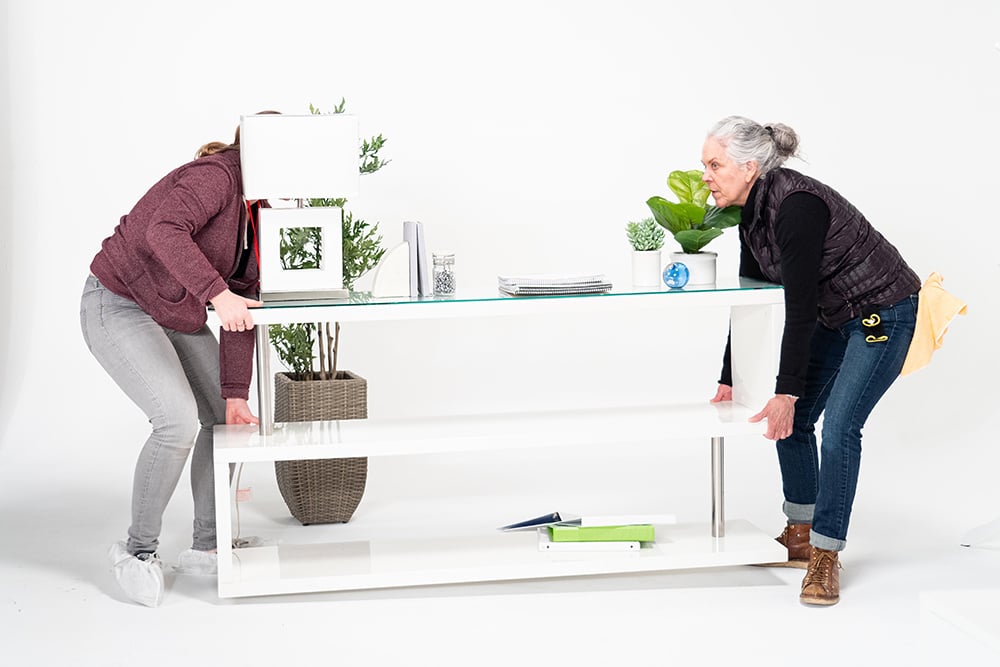 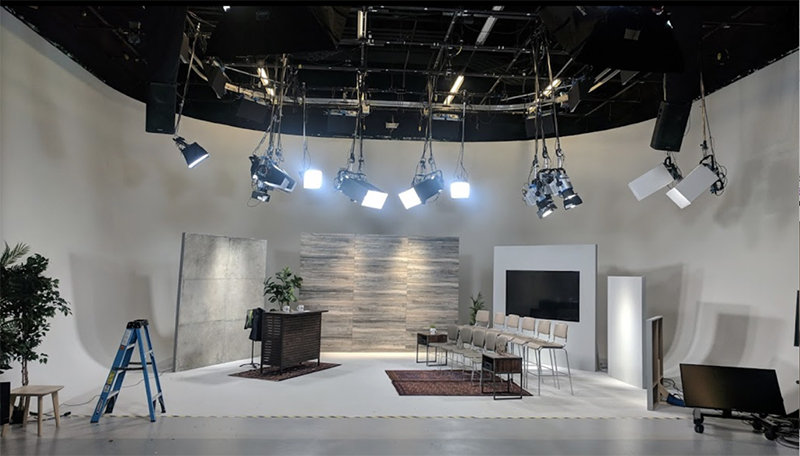 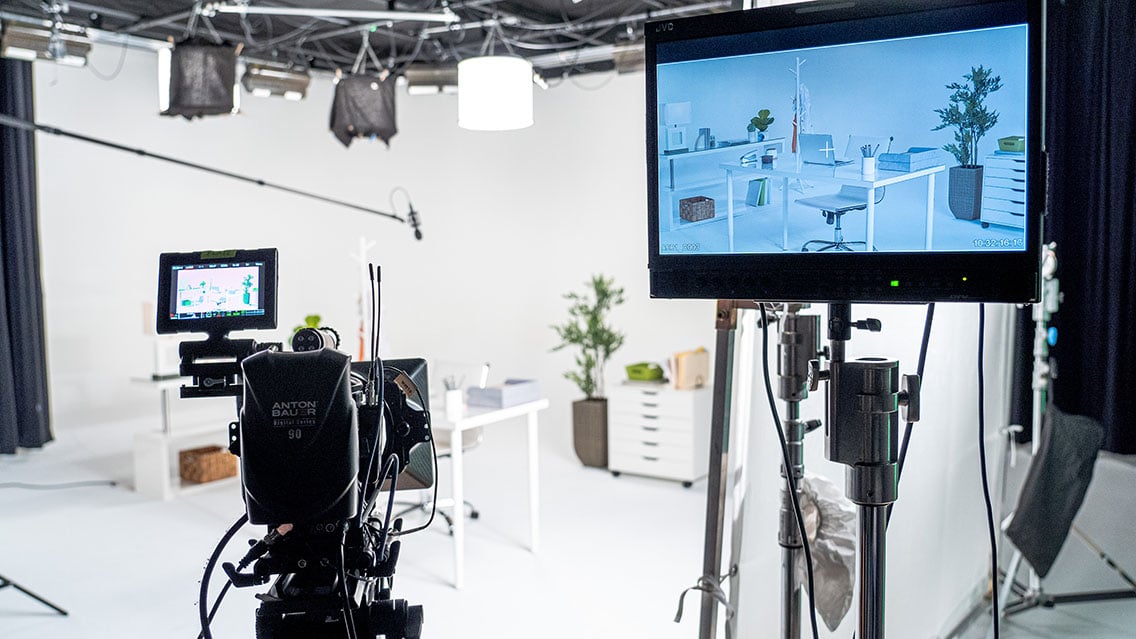 On the flip side, when shooting on-location, generally speaking, what you see is what you get. You can’t remove a wall to get a cool shot. You (usually) can’t paint something if you don’t like the color. What you do get with a real location, though, is a more authentic look and feel, unless you have the aforementioned substantial budget for in-studio set design. Something to consider: Reality is hard to fake.

You may be thinking, “But I need a shot of our talent at a beach/forest/mountain. We have to shoot on location.”

In the past, that may have been the case, but technology has increased by leaps and bounds. There is now something called Virtual Production (VP) using an LED wall where you can transport your on-camera talent to almost anywhere without having to use green screen technology. It’s similar to a green screen, only better because you don’t need a static camera; it can move with your talent. This effect was used extensively in the Disney series The Mandalorian. When done properly, it’s indistinguishable from a real location. Again, however, it’s not cheap.

One of the biggest factors when deciding where to shoot is lighting and sound. Similar to set design, in a studio, you have more control. You can light anything in any way you like. You don’t have to worry about traffic sounds or the inevitable arrival of a janitor down the hall with a vacuum cleaner or the neighbor with a leaf blower. 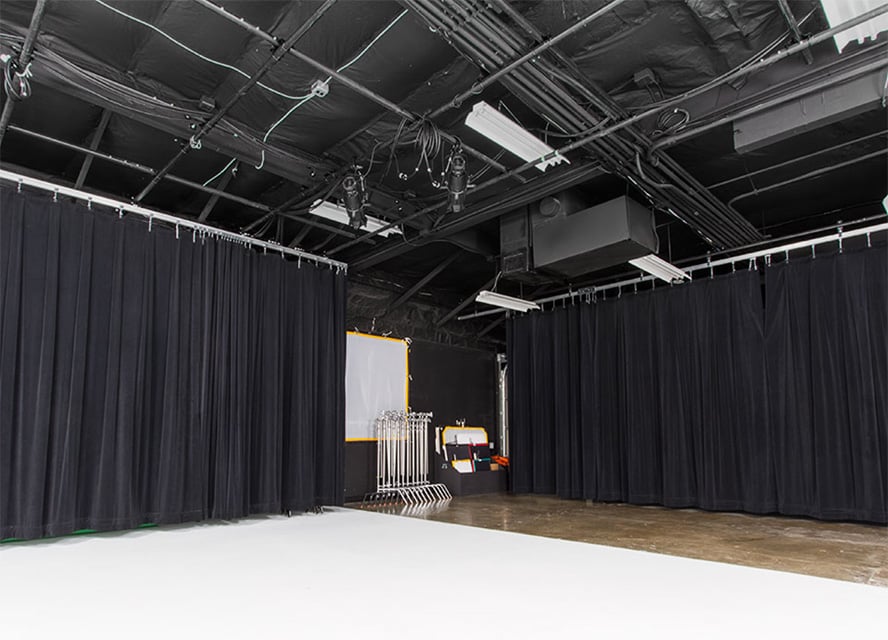 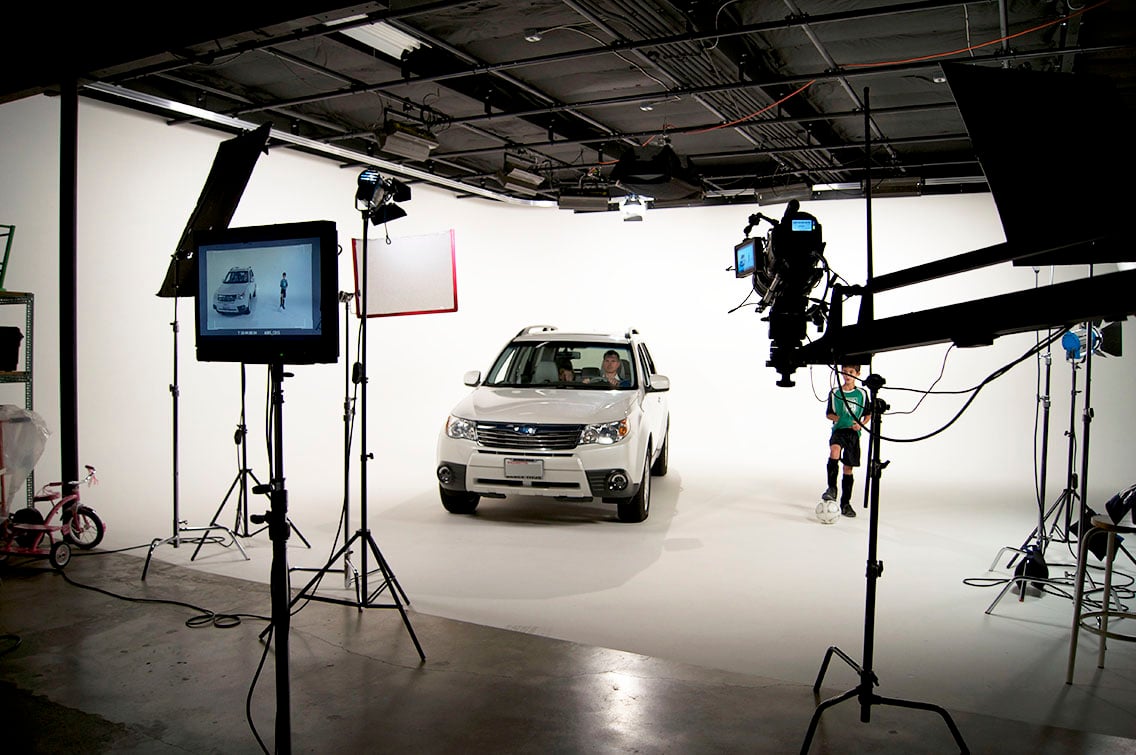 You don’t have that same luxury while shooting on-location. In a studio, you don’t have to worry about blowing a circuit; on location, you may very well.

There’s also mother nature. If you are shooting outside and the weather doesn’t cooperate, well, ‘nuff said. Even if you are shooting on-location but indoors, any light coming in through windows can have a big impact. Natural light changes throughout the day, which could affect the continuity of your shoot. The sun might start behind a cloud, then come out. Light intensity spikes, then drops. If you use a take from 9 a.m. and cut it with a take from 2 p.m., the lighting could be noticeably different.

Deciding Between In Studio or On-Location

There’s a lot to consider when weighing your live-action shooting options. There’re arguments for both in studio and on-location, and it varies from project to project. A lot of it comes down to the creative concept and budget, but when you’re trying to make that decision, consider the following:

Having a trusted partner, like VMG Studios, as part of the process can give you some much-needed peace of mind when deciding where to shoot your video project.

If there’s a video shoot in your future for whatever your needs may be—marketing, training, eLearning, entertainment—VMG Studios can help. We’ll make recommendations for shooting in our studio or on-location based on your budget and storytelling needs.

Regardless of where you shoot, a critical factor to consider is the crew. VMG Studios has the experience and professionalism to ensure a successful production, providing you the best return on your video investment.

We’d love to see how we can support your next project. Click the image below to schedule an introductory planning conversation.