Graphic design and motion design (or as I like to call it, cool looking pixels) don’t have hard and fast, right or wrong ways to do things like other fields do. There’s no quantified rule for the right way to animate a text callout in a corporate explainer.

What we do have are general principles to follow.

Back in 1981, two of the lead animators for Disney – from the Snow White age (1937) to The Rescuers (1977) age – wrote the definitive book on animation; “Disney Animation: The Illusion of Life” which included the 12 Principles of Animation.

These principles have become the gold standard for learning how to make the next Pocahontas or Spider-Man: Into the Spider-Verse.

While these are great, they are written with stories that include dialogue and characters in mind rather than products, services, and explainers.

The 10 Principles of Motion Design

Esteemed motion designer, JR Canest of Vancouver, BC, solved this issue by coming up with a list of the 10 Principles of Motion Design based on the original 12. These 10 principles are as follows:

Motion design adds the 4th dimension to graphic design. This principle is centered around the ways we can interact with time. We can change the frame rate of an animation. We can change the way objects change in relation to the audio’s rhythm. We can also change how fast a property changes over time with animation curves.

For instance, if you have a heavy, plodding beat, movements that correspond with the downbeats of the song can make the contents of the video feel epic, confident, and powerful. This principle refers to a technical side of motion design and how that technical knowledge is applied to creative decisions. How quickly and smoothly something changes in a video affects how we feel about it. Eases control exactly that.

Eases are graphs we use to animate the rates of change for different properties. They’re named as such because when you change two values in After Effects or other animation software, you’re also dictating how you want it to ease out of the first value and into the next value.

In the real world, a physical object’s movement is based on its mass and weight.

A car is a heavy object, so it takes a lot of force for it to come to a stop if it’s moving quickly. On the other hand, a Hot Wheels toy car can easily be stopped even if it’s moving at the same speed as the real car.

When animating abstract imagery, it’s important to think about how heavy and how massive the imagery is and how that influences the way it moves. This is because our eyes are evolved to interpret the real world, not abstract imagery. As much as we think of ourselves as people disconnected from our animal origins, we aren’t. Our eyes still use information about how things around us move to interpret what those things mean to us. Before you make any movement, your body moves in the opposite direction first so that it can create enough momentum to execute the movement you want to make.

A good example of this is this video of a baseball pitcher in 1,000 FPS (frames per second).

See how his throwing arm moves back before throwing the ball forward?

To emphasize a change and show that it requires a large amount of force, add a backwards change first. Showing a change in the opposite direction first can also clue in a viewer on where to look in a frame before the main change happens. Movement in nature doesn’t happen in straight lines. Myriad forces affect how an object moves through space, whether it’s gravity, momentum, or physical limits like the reach of the arm.

To make your animations more naturalistic, add arcs to the movement of even abstract imagery. It’s what our primate eyes like looking at so give them what they want. As objects in reality (noticing a pattern here?) move, the forces they encounter like the ground or the air they move through affect their form. The more malleable they are, the more this change occurs.

Applying this to abstract graphics gives the animation more life and tells the viewer more about what tone the video is trying to achieve.

In the same way that movements have anticipatory movements, changes that require a large amount of force take a lot of force to stop them.

Look again at the baseball pitcher:

When animating change, staggering the different parameters that you have animated so that they don’t all end at the same time can help make an animation look more naturalistic and energetic. When we look at a real object, we have no cause to believe that it isn’t real. Abstract animation doesn’t have that luxury. We have, by definition, made something artificial.

A simple square doesn’t have all of the attributes that a person does that clue us into their vitality and personality. So how can we make an animation of a square hold the viewer’s attention the same way a person can?

If we exaggerate the changes of the square, we can make up for the deficit of attributes that communicate vitality and personality. If the square needs to hop, like in the gif below, make it hang in the air longer, or make it fall faster, or show its shape deforming. A singular change to a bit of abstract imagery is, to put it kindly, too simple. If a line of text simply fades on, it can be boring on its own.

Simple things have to work very hard to retain our attention. If you can find additional ways to show that an object is going through change, especially if the additional ways add new meaning to the base change, you can add interest and exaggeration to an animation.

For example, by adding a rectangle behind the fading on text that slides in from offscreen in a movement that evokes a drifting car, a viewer might think of that text as having a cool and everything’s-under-control tonality to it. This last principle is simple yet incredibly important. Is the animation and design appealing to look at?

Sure, you can have all sorts of layered information and cleverly animated frames but if they’re not good-looking pixels, your viewer simply isn’t going to watch.

We’re making animation to communicate ideas about topics that aren’t always all that exciting on their surface. Make sure you make it fun. Whether you’re an aspiring animator, someone in the market for a motion graphics video, or someone who simply enjoys learning the craft, understanding these 10 principals can help spark inspiration for your next project.


The beauty of creating motion graphics and animation is there’s no right way to do it. Experiment with different techniques, incorporate some or all of the 10 principles we've just outlined, and you’ll surely find a creative option to portray your messaging through motion design. 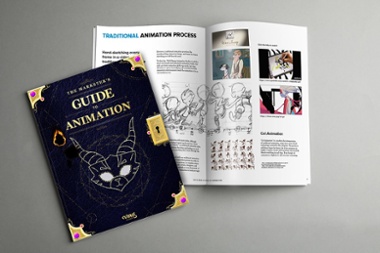 Adam Crawford is a motion graphics designer at VMG Studios. Outside of work he cuddles with his cats, reads comics, or is planning opportunities for puns in normal conversation.