How to Write Video Dialogue (And Why It’s Important) 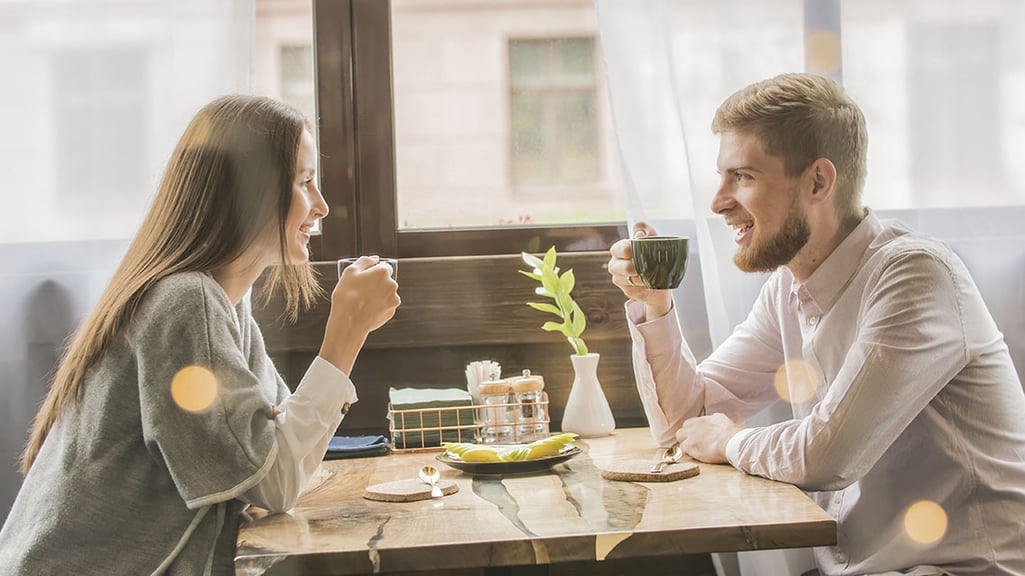 Beth and Brad sit huddled close over their cappuccinos. There’s a mischievous glint in Beth’s eyes. Brad’s seen that look before and is more than ready to match wits with his cinephile girlfriend.

What can make a terrific story better?

Bingo. And what makes terrific dialogue?

I’m sure you’ll tell me.

Check out the big brain on Brad!

Thank you. But before we talk about what makes good dialogue …

You’re going to tell me the purpose of good dialogue?

No one told me there’d be math.

All right. That’s enough of the script gimmick. You get the set up.

How Dialogue Plays a Role in Your Story

Director Alfred Hitchcock once said, “When we tell a story in cinema we should resort to dialogue only when it’s impossible to do otherwise.” Hitchcock wasn’t saying dialogue wasn’t important, he was simply trying to support the age-old writing advice of show don’t tell. If dialogue wasn’t important we’d still be watching silent films. But when motion pictures crossed over into “Talkies” filmmakers suddenly had dialogue at their disposal to help them entertain the masses. It became an important tool.

Here’s why dialogue plays such a critical role in storytelling:

That’s the purpose of dialogue. Now let’s dig deeper into how to write dialogue so that it effectively fills those roles.


Each character has their own distinct voice. You should be able to read dialogue from several different characters and instantly know who’s who simply by how they speak.

What goes into a character’s voice? Their age, gender, race, personality, world view, culture. Anything that has shaped that character. An English aristocrat is going to sound decidedly different from a blue-collar guy from the Bronx.

What a person says, how they say it, and the tone in which they speak provides us with a lot of information about them. Their dialogue not only develops them but defines them.

Jack Nicholson’s Colonel Jessup is only in the movie A Few Good Men for maybe ten minutes, but in those ten minutes you get a very clear idea of who he is.

All dialogue should move the story forward toward its conclusion. Otherwise it’s just filler. Dialogue should always serve a purpose. It should escalate tension, reveal motivations and/or create a fundamental shift in the story. You should learn something new about a character or their situation after every exchange.

In this iconic scene from the movie Taken, Liam Neeson pretty much sums up everything you need to know about how the movie is going to move forward.

Rarely should characters simply say what’s on their mind. That’s not how (most) people work in general. Especially with any subject who’s emotionally charged. They hem and haw or speak indirectly. When characters are overly direct it sounds obvious, like the audience is being spoon-fed the information. What fun is that?

Good dialogue should sound realistic, but not sound like how people really talk because how people talk in real life is often boring. Think of good dialogue as heightened reality, the way you wish you could speak if you had a chance to think through your words before they came out of your mouth.

In this scene from the movie Gladiator, Joaquin Phoenix’s character gives a chilling warning to his sister without ever directly accusing her of anything. It’s all implied.

This is tricky because you don’t want to rely too heavily on exposition, telling the audience precisely what’s going on, but at the same time you need to give context so that actions and events make sense.

How a character acts and responds to circumstances gives you a pretty good sense of the type of person they are but sometimes you need a few comments dropped here and there to help paint a clearer picture.

If you saw a character looking wistfully at an interaction between a father and son that would give you a sense of what he’s feeling. But then if you see that same character later on standing at a grave taking a swig out of a bottle before saying, “I hope they don’t got air conditioning where you’re at you son of a bitch,” that one line tells you all you need to know about his relationship with his father.

Here’s a clip from the classic film Casablanca that uses an exchange between Humphrey Bogart’s Rick and Claude Rain’s Inspector Renault that gives insights into both characters with a few simple lines. It develops the characters and fills in information gaps.

How to Write a Video Script

One last thing I should probably mention is that good dialogue is usually short dialogue, so make your conversations count. Perhaps you’re not creating a dramatic motion picture but a marketing video that still needs to grab and hold the viewer’s attention. Many of the principles of good dialogue still apply.

If you need help on that front, give us a call at VMG Studios. Because the last thing you want is this:

Click the image below for a free downloadable video script worksheet