How Long Does it Take to Make an Animation? (Animated Video)

You’ve probably heard this before, but it’s worth reiterating: use video to promote your business.

And don’t just take that advice from me. Research has found that 81% of people have been convinced to buy a product or service by watching a brand’s video. Meanwhile, 97% of marketers say video has helped increase user understanding of their product or service, and better yet, 76% say it helped them increase sales.

Animated videos are a great way to sell or tell your message for a variety of reasons: they can help explain complex concepts in a unique way, you can create things that are either hard to mimic in real life or don’t exist in real life, and they have a longer shelf life and are easier to update than a live-action video.

Besides knowing the cost of an animation, you probably want to know how long it will take to complete. This article will dive into the timeline for creating an animated video and what you’ll want to consider before taking on your next project.

If you’re looking for a ballpark range on how long it will take to bring an animation/animated video to life, 6-8 weeks is generally a safe bet.

Of course, there are a myriad of factors that can either accelerate or delay that timeline. That includes the number of videos – is it a series of four 15-second videos or one 2-minute long video? The workflow of the approval process will also be a factor – how many people on the client’s end are reviewing the animations?

Another factor that dictates the timeline of creating an animation is whether it’s 2D or 3D.

In simple terms, 3D animations are more life-like and take the illustrations’ height, weight, and depth into consideration.

With 3D animations, there are additional steps that are taken to accurately produce the content. That includes processing computer-aided design, also known as CAD, files, texturing for a more realistic look and feel, and much longer rendering times. With that in mind, 3D animations take longer to produce (and cost more money).

Ideally, you’ll decide on whether your animation is 2D or 3D towards the beginning of your project to outline a realistic timeframe for its completion. This brings us to the next point…

Timeline Segments for an Animation

Just like a live-action video, you can break down the timeline of creating an animated video into 5 segments.

These segments help organize the process and allow for checkpoints along the way, for example, let’s try to have the creative development phase done by *insert date here*.

Some of these phases can overlap with one another, which is why it’s important to remember that the timeline for each individual project is custom and can fluctuate. That’s also because each segment generally has up to 3 rounds of revisions which includes an average 24-hour review cycle for client feedback.

Creative Development and Strategy of an Animation

All animations start with creative development: what’s the message of your animation, who are you targeting, and how are you going to do so? Do you create a character that walks you through a step-by-step process on how to do something? Do you want to use kinetic text with simple animations to show off a technological product or service?

Creative development is that big idea that brings your message to life. While creative development starts at the beginning of a project, it never really ends as your ideas expand and shift throughout the whole process. However, to kick it all off, we create style frame designs. Depending on the client’s budget, here at VMG Studios, we typically include up to 2 unique style frame designs to choose from to ensure it’s the right concept.

In an ideal world, coming up with the creative concept, strategizing how it can be executed, and creating style frames can take anywhere from a few days or up to a week.

Once the creative concept has been decided, you’ll move into scripting. Even if your animation doesn’t have a voice-over (i.e., the story is told via kinetic text on screen), you’ll still need to outline the story and what is being shown on screen. Scripts generally go through 2 – 3 revisions. This can take anywhere from a couple of days to a full week depending on the communication between the creative team and those approving the project (the client).

Besides the script, storyboards will also be put together to show what the animation will look like. Storyboards often look like a simplistic version of a comic book: still illustrations with dialogue and other defining context clues (sounds, motions, transitions, etc.).

Pending the budget, there are two ways that we approach storyboarding. We can start with a sketch storyboard of the script to really nail down the scenes, characters, device needs, layout, and flow. If you go this route, the approved sketch storyboard will inform the graphic assets that need to be designed. We encourage sketch storyboards if you have the money or time to allow for this part of the process.

The other approach to storyboarding, typically when there is less budget or a strict deadline, is to jump right into digital storyboards that incorporate the designed graphic assets that bring the story/messaging to life. Here’s an example of a digital storyboard from the VMG Studios explainer video. 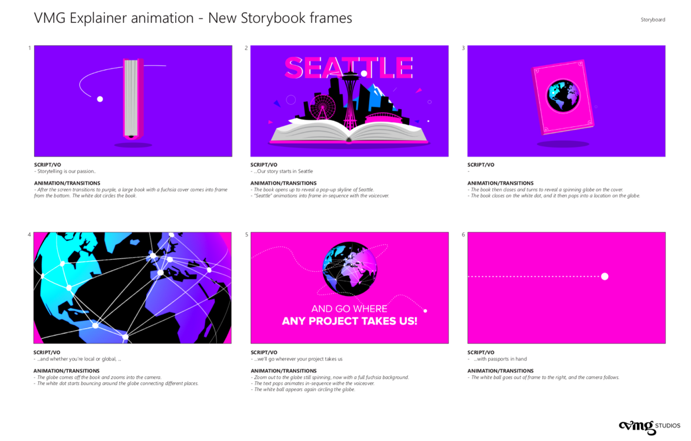 Storyboarding can sometimes run concurrently with the script and will take several days to create depending on the complexity of the animation, if character design is needed, and the length of the video. And just like the script, storyboards generally go through 2 – 3 revisions.

Once the script and storyboard have been approved, which together can take up to 2 weeks, you’ll start seeing your project come to life!

READ: WHAT ARE MOOD BOARDS VS. STYLE FRAMES VS. STORYBOARDS

Now, the real fun happens. Just like filming the scenes for a live-action video, this phase is where the design is actually animated. In general, this takes a couple of weeks, and can even take three to four depending on the factors mentioned earlier: complexity of the animation, length of the video, number of videos, and time needed for client review cycles.

Similar to the script and storyboards, there are several rounds of review for the animation. Naturally, if the first version is solid and only has a few minor changes, the timeline will move faster. If there are multiple notes and revisions, it’ll take longer to finish.

If your animation includes a voice-over, we’ll want to host auditions for professional voice talent and record the narration.

Here at VMG Studios, while we are conducting voice-over auditions, we have someone internally record a scratch track of the narration. This way, the animators can use that track as a base point for timing the animation with the narration. It also helps the client see and hear the script together and make any additional tweaks before bringing in the professional voice talent to record.

From here, your project will move into sound design. That includes adding music, sound effects, leveling, and mixing the audio for whatever platform the video will be released: web, broadcast, live presentation, etc.

Adding a voice-over and taking sound design into consideration can take about a week.

Once your animation is complete, you’ll address accessibility considerations such as adding subtitles and/or closed captions, or localizing to other languages. When all is said and done, we’ll export your final deliverable.

Bringing an Animation to Life

You’ve likely heard the phrase “great things take time” and a highly-produced animated video is no exception. When putting together a realistic timeline for your next animated project, set aside 6 – 8 weeks.

Animations are a fun, unique, and often eye-catching way to tell a story. Animated videos often have a longer shelf life and can be updated more easily than a live-action option. Another bonus is if you create an animated design asset, such as a character, you can repurpose that asset for future videos saving both time and money, and who doesn’t love that?